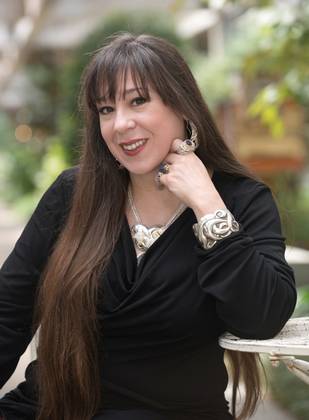 Victoria Lansford has spent over 40 years in the visual, literary, and performing arts to paint with fire, forge with words, and choreograph with color, line, and texture. She combines centuries old metalsmithing processes with cutting edge technology to create artwork that ranges in scale from wearable to architectural and is made from responsibly sourced precious metals and gemstones. Her award winning and genre busting art and fine craft is a visual exploration of feminine power, informed by myth and music, inspired by nature, and devoted to the science that makes it possible.

Lansford’s art has has been widely exhibited, including at the Museum of Contemporary Craft, Houston Museum of Fine Arts, the Wayne Arts Center, the Mulvane Art Museum, Houston Center for Contemporary Crafts, Rochester Institute of Technology, and the Georgia Museum and in numerous publications, including the Lark 500 book series, Metalsmith and Jewelry Artist magazines, Repousse and Chasing (Brynmorgen Press), On Body and Soul: Contemporary Amulets to Armor (Schiffer) and on Home and Garden Television. Never content to hoard information or technical discoveries, Lansford’s dedication to craft has created a renaissance for many, old world, fine metal techniques, including Russian filigree and Eastern repousse. Through her sold out workshops, her instructional video and book series, Metal Techniques of Bronze Age Masters, and her iPhone™ app, iMakeJewelry she has mentored other creatives around the world.

Although her first love is creating art jewelry, Lansford’s most recent large-scale commissions were for one of the world’s largest, bespoke, superyachts, built and dedicated as a platform for scientists studying endangered marine life in remote regions of the world. The works comprised a floor to ceiling, etched copper screen and copper, Eastern repousse double doors, both depicting oceanic scenes. She won a 2019 Independent Publishers Award for Best Design and a 2020 e-Lit award for her ground breaking ebook Giving Voice (Spiral Publications) with introduction by best-selling author of the Griffin and Sabine trilogies Nick Bantock. The book combines ancient metalsmithing and Medieval illumination with digital animation to tell a story of how the small kindnesses we show each other can literally change the course of someone’s life.

Lansford lives in Atlanta, GA with her husband Chris, son Skyler, and two Shelties Boudica and Elizabeth. She considers the term ‘geek’ a compliment, can’t stand being pigeon-holed, and has a constant creative drive that would put most people over the edge.